There once was a girl named Cara who traipsed across the globe in search of inspiring interiors, fabulous fashion and glorious gastronomy. This is what she found…

Hiking up Lycabettus Hill to see fantastic 360° views of Athens and the sweet little ‘Saint-Georges’ chapel perched on the top. Running a cheeky lap, standing on the podium and holding a real Olympic Torch at the Panathenaic Stadium. Strolling the suburbs of Anofiatika, Plaka and Monastiraki. Discovering Dionysus’ Theatre and the Odeon of Herodes Atticus Theatre on the Southern Slope of the Acropolis, and the Parthenon and Temple of Athena Nike at the summit. Exploring the Ancient Agora, the Temple of Hephaistos and Hadrian’s Library. Perusing the Monastiraki Flea Markets – you’ll find both treasures and trash here. Sipping a ‘Parthenon Pash’ cocktail at the rooftop bar of our hostel with a gorgeous view of the sunset behind the beautifully lit-up Acropolis.

I would recommend hiking Lycabettus Hill as the first activity on your to do list in Athens. From the top you get a really good idea of the lay out of the city and can make out the locations of all of the major archaeological sites that you may want to visit. It only takes a maximum of 20 minutes to get from the base to the top of the hill so it’s not even a major hike, and the views from the top are so worth it.

If you decide to go to the Panathenaic Stadium (recommended), then definitely grab yourself an audio tape to tour around with. It’s a total bargain at 3 euro for entry AND audio tape and the commentary makes sure you don’t miss out on any of the interesting (and sometimes not so obvious) features of the stadium. Interestingly, the Olympic Torch that travels to the city hosting the Olympic Games every 4 years is lit at the Panathenaic Stadium.

To visit all of incredible archaeological sites in the central Athens area you’d be a fool not to get the 12 euro ‘special package ticket’ produced by the Ministry of Culture. This ticket allows you entry into the Acropolis (which is a 12 euro entry fee on its own anyway) plus 6 other archaeological sites, including; the Northern and Southern Slopes of the Acropolis, the Ancient Agora, Hadrian’s Library, the Roman Agora, Kerameikos (ancient cemetary), and the Olympieon (where you’ll find the colossal Temple of Olympian Zeus). You can buy the ticket at any of the entrances to the 7 participating sites and it is valid for 4 days – easy peasy!

When visiting the Acropolis, go as early in the morning as you can to beat the heat and the throngs of tourists.

If you’re after a tasty snack on the go in Greece, your go-to meal is a ‘Gyros‘ – a traditional Greek sandwich made with slices of spiced meat cooked on a spit, served with salad in pita bread. They’re usually the cheapest thing on the menu which is a bonus and are served up super quick with a slathering of scrummy sauces. Apparently a lot of the world is already familiar with gyros, but little old me, from little old New Zealand, had never heard of them before and I absolutely butchered the pronunciation making my first order for one. So, just in case you didn’t know, like me, it’s pronounced ‘hear-oss’, NOT ‘jai-rose’ (doh!).

Another popular and traditional Greek fast food is ‘Souvlaki‘ – a meal of small tender cuts of meat, most often served on a skewer (sometimes with vegetables) for eating with your hands, or in a pita bread sandwich with garnishes and sauces (so pretty much a gyros), or with fried potatoes on a dinner plate. A tasty and inexpensive lunch or dinner option.

Apparently the specialty dish of the region is goat (or kid really) meat served with potatoes fried in olive oil and sprinkled in sea salt, all drizzled in a zesty lemon sauce – I can’t tell you if it’s true, but I can tell you that it’s delicious!! 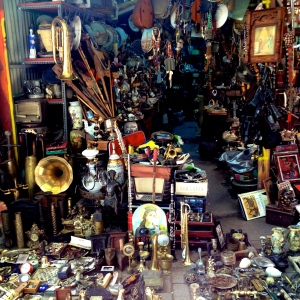 Dionysus’ Theatre on the Southern Slopes of the Acropolis

Greek Flag at the Summit of Lycabettus Hill

The Parthenon atop the Acroplis 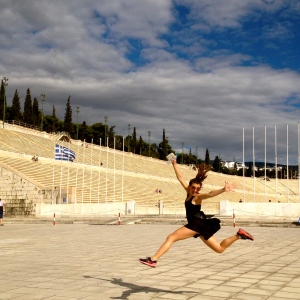 Feeling Sporty at the Panathenaic Stadium 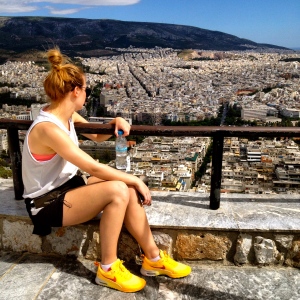